Emma was home finally and it was much harder than I expected. Since she was still on the feeding tube, I had to use a gravity bag to feed her every 3 hours. It was completely exhausting to do this day after day. One night I was utterly delirious and I had had enough. I couldn’t deal with the constant pumping and measuring and feeding tube parts. I got Emma in a good position and I tried for a few minutes until she latched! It was a miracle! Finally!! After that she nursed like a champ and a week later her pediatrician removed her feeding tube. Each day got easier with feeding and Emma started to seem more and more like a “normal” baby. She was enrolled in the Early Intervention program and over the next couple of months had an occupational therapist and physical therapist coming to the house each week. These 2 therapists were a saving grace for Emma. The way they explained it was that since some of the connections in Emma’s brain were blocked, then we would have to create new pathways for her to learn.

At 4 days old, Emma underwent surgery for a right VP shunt placement. It went perfectly and being the strong fighter that she is, they were even able to remove her breathing tube fairly soon after surgery. Unfortunately, that came out and an NG feeding tube went in. Emma was not eating and the doctors wanted to make sure she got the proper nourishment for recovery. After I was discharged from the SDU upstairs in the hospital, I made the 1+ hour drive to and from the hospital everyday to see my baby. I would get there as early as possible and leave as late as possible. There would be days that I would just sit by her bedside and stare at her while she slept for hours on end. I would get home at night and cry for hours because my baby wasn’t with me. The pain and angst I felt not having Emma home with me was a feeling no mother should ever have to feel. It felt like a piece of me was missing and I would stare at her picture each night and bawl while I pumped bottles for her feeding tube the next day. For 3 weeks I made the drive by myself mostly to and from the hospital. I couldn’t go a day without being with her. Finally, after I learned how to place her NG tube, in case it came out, the doctors felt Emma was ready to go home. I’d never been more excited in my life!! 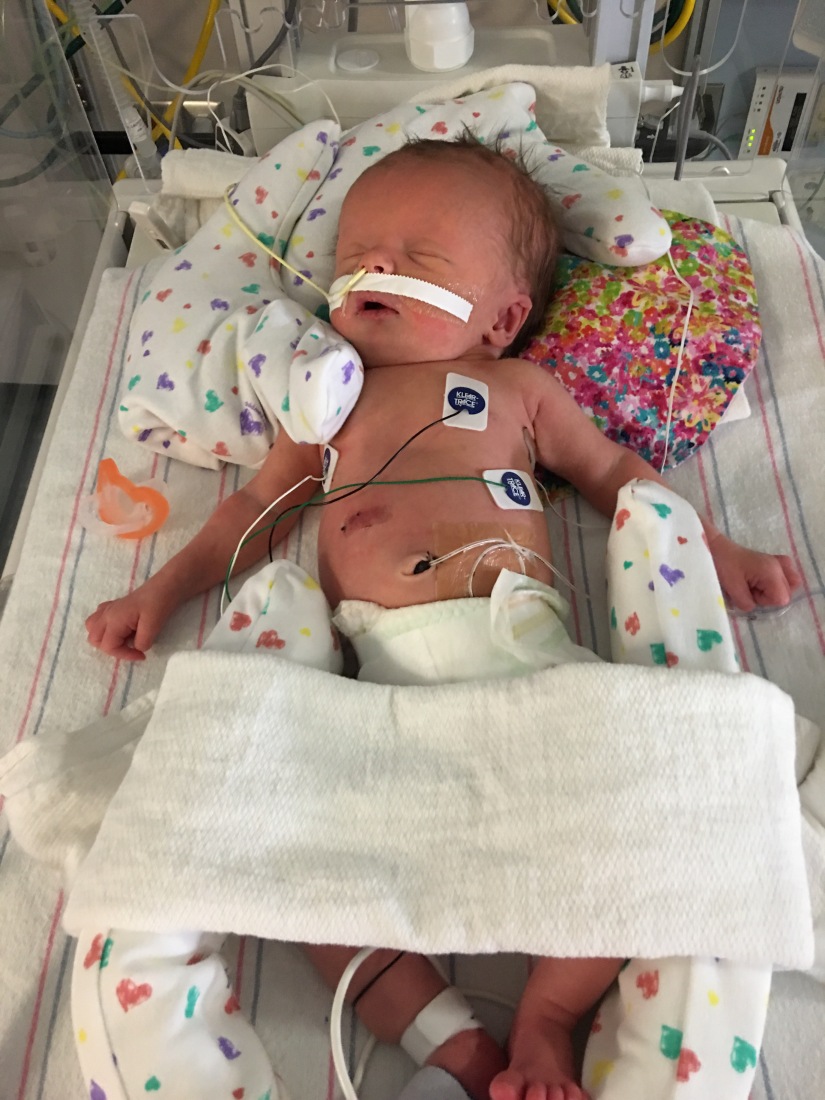 I’m 35 and 5 days pregnant when Emma was delivered via c-section at the hospital. She was 8lbs and absolutely beautiful. I got to see her for a few seconds and then she was whisked away to the NICU. I didn’t get to go down there to see her until the following day. Waiting to see your newborn baby is pure torture. When I finally did see her, she was hooked up to a breathing tube and a ton of other wires and monitors. Her lungs were not as strong as the doctors would have liked them to be since she was under 37 weeks. The moment I got to hold her I fell in love. Emma was the most amazing gift I’ve ever been given. I was so incredibly happy but so scared because I knew her surgery would be happening in the near future.

After receiving all of that terrible news, we were finally scheduled to meet with the neurosurgeon. We were trying to be optimistic and positive but still realistic and not have high expectations of good news. It was finally time to meet the doctor. The doc didn’t waste any time in letting us know that after reviewing all of the baby’s scans he thought she was going to be fine but would most likely have some developmental delays. The doc didn’t see any damage to her brain tissue in the scans. We couldn’t believe it. After all of this time and horrific stories of potential outcomes finally came some amazing news. We could breathe a sigh of relief. The doc was completely confident that a VP shunt would do the job and keep the fluid from filling her head once she was born. The doc would place the shunt in her head, which at the time I didn’t have any idea what a shunt was or what it did. It’s a small device implanted between the skin and skull just behind her ear. It has a long silicone tube that runs the length of her head to her abdomen. It drains the excess fluid via the tube into an empty cavity in her belly area. The doc would have to wait until she was a few days old to do the surgery but was very confident it would go smoothly.

Does your child have a shunt? When did they have it placed? How are they doing now? Please leave a comment or email me directly.

Over the next few months, I went to the hospital for my monthly ultrasound and every month I was told that her ventricles were continually filling with fluid. The doctors were extremely concerned but they couldn’t do anything about it until she was born. As a first time mother, I basically went into a depression. I cried everyday and not just because of the hormones. I would have horrible thoughts about wanting a miscarriage so my baby didn’t have to suffer in life. Then I would feel horrible guilt for thinking that way and be even more depressed. I tried to be positive but the unknown of what my baby’s future held was slowly eating me alive. As the baby’s due date approached I was so nervous and scared. We were told so many possible outcomes for my baby; Down Syndrome, Cerebral Palsy, mental retardation, stillbirth or she could be born but die a few days later. The most terrifying thing I was told was when I was 28 weeks pregnant. The OB performing my ultrasound had just measured her ventricles for what felt like the 100th time. At this point, each side was at 50+mm, much bigger than normal. He told me that the fluid was filling her head at such a high rate that we were basically waiting for it to increase so much so that it would cause a “blow out” and destroy a lot of brain tissue. I couldn’t handle that news and had a breakdown. It’s scary enough growing and carrying this little human being inside of you but to be told that her fate was basically doomed was beyond comprehension as her mother. The worst part I think was that I had no control over any of it. This baby that I’m supposed to protect was going to have a horrible life and I couldn’t do anything about it.

My first appointment at the hospital was a full 12+ hour day from start to finish. I had a full body scan of my baby, EKG, MRI and CT. I met with a geneticist and multiple doctors and nurses throughout the day to find out what was wrong with my baby. By the end of this exhausting day we finally met with an OB to get some answers. She explained to us that on the MRI, they found some old blood staining in the baby’s brain from 12 weeks. At this point, they ruled out genetics and infection. The only explanation they could give us, was that she had a brain bleed in utero. They didn’t really have any idea how it happened but that maybe she pulled on her cord and flipped herself causing a capillary in her head to burst. The bleed caused a clot in the base of her skull where the cerebral fluid should drain naturally from the head. Since the baby’s was blocked by the clot, the fluid had nowhere to go and was slowly filling her head. My husband and I were absolutely devastated. I never in a million years thought I would have any serious issues during my pregnancy. Up until this point, I had horrible nausea that had literally started to subside about a week prior, and I thought that was the worst of it. I was told to continue my care at the hospital until my baby was born. I would be getting monthly ultrasounds to measure her ventricles and then weekly once it got closer to delivery. Part of the issue with the enlarged ventricles is that it causes the baby’s head to also enlarge and doctors were concerned her head might get too big for her to even be delivered. We were handed a stack of papers on mild ventriculomegaly and hydrocephalus, what they believed my baby had. Talk about overwhelming. I didn’t even know where to start as far as trying to read all of these documents. I still hadn’t processed what we were just told.

I was 20 weeks pregnant with my first child and beyond excited to find out if I was carrying a baby boy or girl. We went to the ultrasound appointment and were told we were having a little girl. I was thrilled and terrified all at the same time. We went home and the next day I received a call from the ultrasound tech. “The doctor wants me to get more pictures of her head.” I said ok and thought nothing of it. I just assumed baby hadn’t been cooperating and they wanted better pictures. I showed up to my appointment and little did I know I was about to receive some bad news. After more pictures were taken and the doctor was called in to look for himself, I was told to meet him in his office. At that moment, I knew  something was wrong and I started bawling. I had my mom with me luckily since my husband had been working. The doctor began to explain to us that there are 2 large ventricles in the head and there is fluid inside the ventricles. They measure the amount of fluid by the ultrasound and my baby’s ventricles were measuring a bit over “normal”. Of course, he starts to explain what that could mean as far as her health in the future. I was told numerous things at that appointment including the possibility of Down Syndrome. I was told that it wasn’t too late to terminate the pregnancy. That was completely devastating to hear. I had been carrying this little angel for 20+ weeks and couldn’t at this point imagine not giving birth. I was referred to a children’s hospital from that point on and it only got harder from there.

Did you find out something about your baby at an ultrasound? How did you feel? I would love to hear how you handled the news and what your experience was like. Please leave a comment or email me directly.